Dealing with Donations received for on-payment to other Good Causes! So, what do I mean, when I say Donations Received for others?

When I refer to Donations Received for Others, in the church context, I am referring to the money given to, or collected by, churches. This money is given with the expectation that the church will pass on all the money it receives to the person or organisation they have given it for.

Churches may promote or encourage donations for certain missions, or organisations or disaster reliefs that they believe are good causes.

In effect, the church is just a conduit or channel for that money. Instead of individual people giving directly to a mission organisation, they give to the church and then, after it accumulates, the church pays the money in lump sum amounts to the intended recipient.

When a donation is received, the church effectively holds the money, in trust, until it is paid out.

This means, that the donation is not the income of the church. And when the money is paid to the intended recipients, it is not an expense of the church.

We have come across many churches that treat the donation as the church’s income and the payout of the money as a church expense.

Donations received for On-Payment, are liabilities, until the money is paid out.

Have a look at this Receive Money Transaction.

Note the Account allocated is Rec’d Donations for On-Payment and the Tracking is ABM. 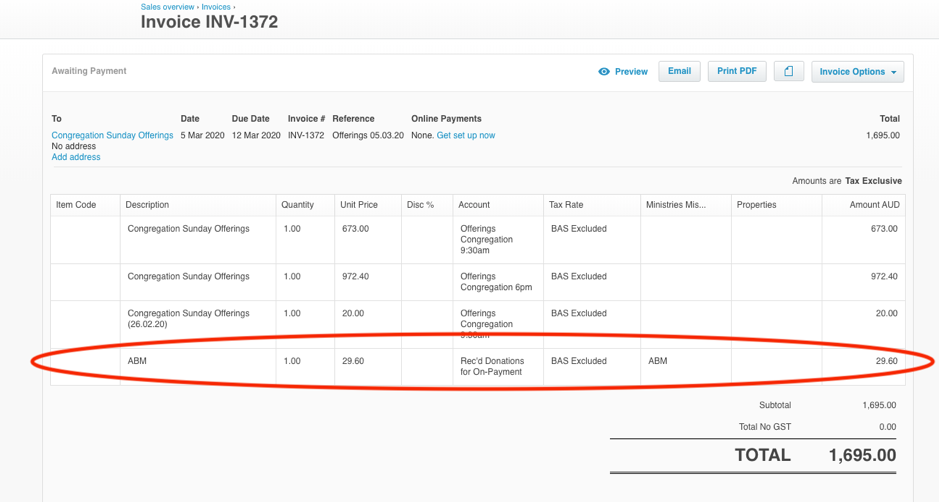 The money received for ABM is allocated to the Rec’d Donations for On-Payment account, and the Tracking is ABM

When the money is paid to the organisation, allocate the transaction to the same Rec’d Donations for On-Payment account, and use the same the Tracking Option.

In this Spend Money Transaction, see the account and the tracking

So that you can track how much you have received and paid out, click here to learn how to create a great Missions Donations Payable report in Xero.

Don’t forget to check out our last post about what to do in the change over of your treasurer.

Official COMPLIANCE TO-DO list in a Treasurer hand over